Left The OC on Wednesday morning, August 8, headed for Lake Tahoe: Stop #1 of the NeuroAdventures World Tour. The plan: meet up with trip organizer DT, aka -DfT, aka – Dr. fukking Tom initially for a ride en-route on Thursday, then join Erik, Debbie, Margo and Clinkie for dinner Thursday evening, and follow that up with some epic Tahoe rides Friday through Sunday.

Blue skies and light traffic on I-5 made for a pleasant drive.

Decided to stop along the way for some lunch. And nothing quite screams “Road Trip!” like pulling up to a Bakersfield truck stop for some greasy-ass Jack in the Box tacos:

Two tacos for $1.69, along with some 99¢ fries. Woo! Was the food-coma dopamine hit worth the impending gut punch? Oh, yah. Smiling Jack definitely approves…

The aftermath looked like some kind of Law and Order crime scene, though. Gruesome…

Time to get back on the road. But first, since I planned to stop in SF for dinner with daughter Erin that evening, decided to take the bike off the roof rack, remove both wheels, and stuff it into the back of the SUV, to deter potential thieves when parking on the streets near The Haight.

Remainder of the drive to SF was uneventful. Then met up with Erin and we went to a local family Italian restaurant (Bambino’s Ristorante – highly recommended!), where I ordered some amazing chicken cannelloni in a creamy marinara sauce, accompanied with a house-blend red wine, followed by crazy-good tiramisu and an espresso macchiato. After a quick after-dinner stroll around the Haight, walked Erin back to her Cole Valley flat, and drove an easy hour to Napa for a night’s rest at the local Motel 6, located at the apparent epicenter of fast-food heaven:

Motel 6 accommodations were spartan but fine inside, but the noise outside was pretty brutal… Every couple hours, until the wee hours of the morning, raucous guests decided to shout f-bombs across the balcony on the way to their rooms, for reasons I could never quite figure out… Oh well, good riddance to Motel 6 rubbish, and after an early-morning breakfast burrito at one of the myriad options nearby, I was on my way up the 80 to the 50 towards our first ride, Sly Park, visions of flow trails playing in my head.

Pulled up to the parking area a little ahead of our 10am meeting time, and soon enough, DT pulled up, as well, so we began assembling our bikes for the ride ahead. OK, front and rear tires out, frame out, upside down on the dirt, towel under the dropper post handlebar button, and let’s put the wheels on… Wait, where’s my rear axle quick release? Where da fucq is my REAR AXLE QUICK RELEASE!?!?!? Apparently, on the tarmac in the parking lot of the Jack in the Box at a certain Bakersfield truck stop, just where I must’ve left it… FUCK!!!!

DT suggested calling some Tahoe bike shops to see if they had any in stock. First shop found in a Google search looked promising, and they did have some 12×142 rear axles, but they couldn’t tell if the thread patterns were right until I brought it in. So we decided DT should ride Sly Park, and I would drive another hour to our South Lake Tahoe final destination and check out the bike shops there.

Long story short, they didn’t have the axle I needed in stock, since Pivot bikes like mine take an unusual thread pattern, but they could order one for their Friday delivery from Pivot. In the meantime, did I want to rent a demo bike? Well, f-yes, since they had a 2017 Mach 6 available, same size and geometry as mine. Main diffs were aluminum instead of carbon frame (no biggie) and a regular, i.e. – non-dropper, seat post (suckee, but can live without a dropper post for a day or so…).

Then the shop mechanic showed me a loop on their Tahoe MTB map that I could do from their shop parking lot, so it was off to ride!

Got a few photos from the loop, but no video.

Here’s a typical view of the wandering singletrack thru some decent pine forest: 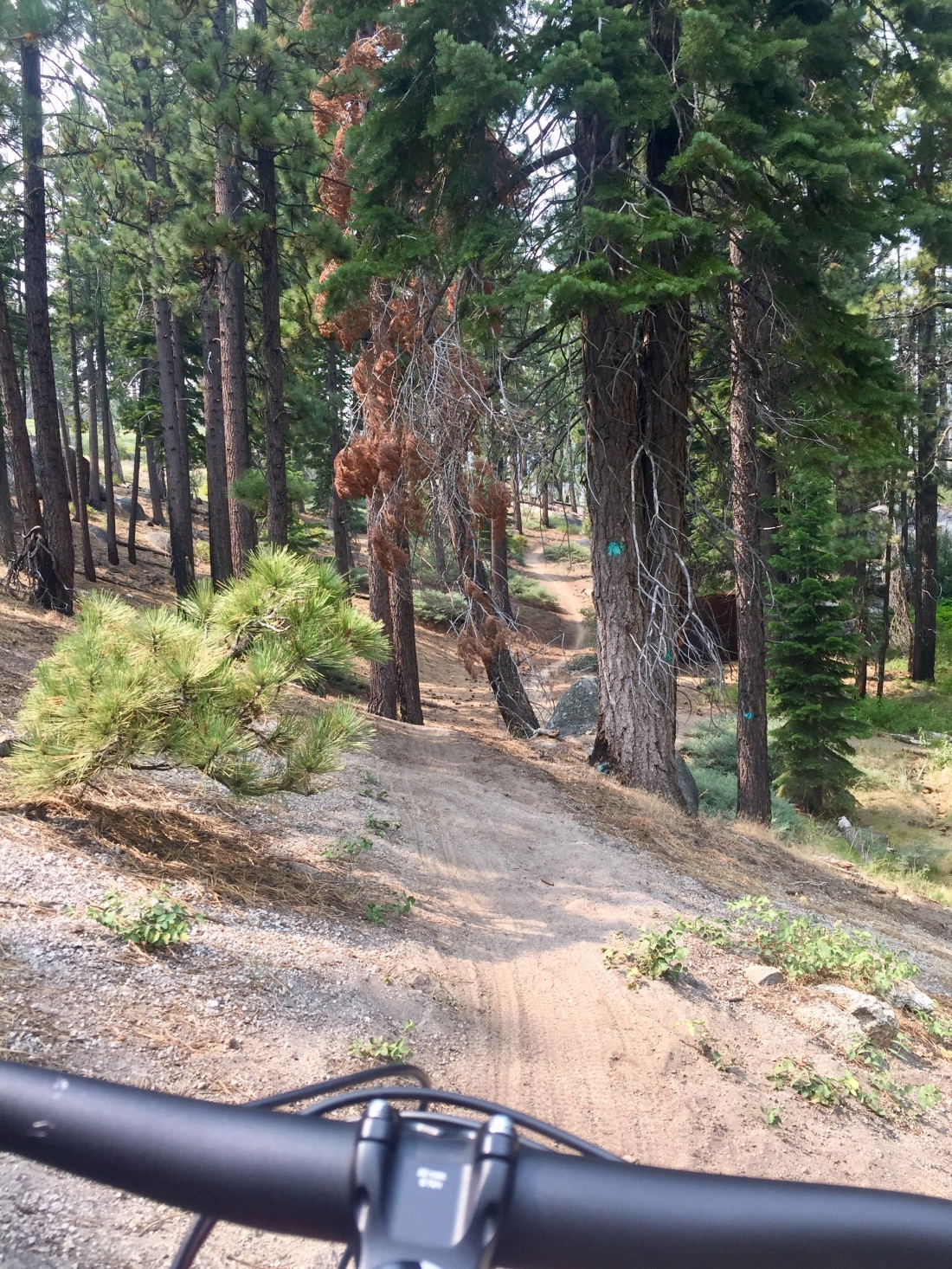 Here’s the cool orange demo bike, resting a bit against a tree:

A little more POV of the s-track: 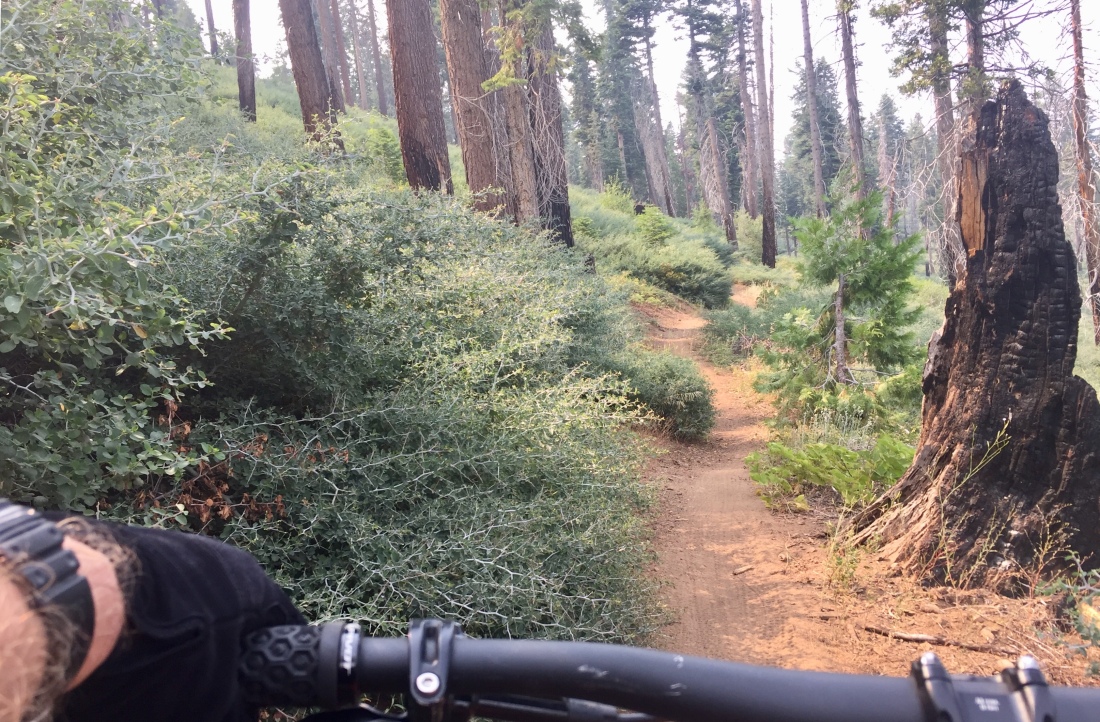 And a final ominous warning sign upon leaving the trail:

“If you ride this trail you will be eaten by a bear!” At least I think that’s what it’s saying. Upon closer inspection, it appears to be something stapled up there by the local community as a joke, since it’s just a printed page in plastic and doesn’t have any USFS logos on it or anything. Also, since I am living proof you can ride there without being eaten by a bear, it’s downright misleading, as well! So, don’t believe it! Go ahead and ride there. It’s a fun beginner/low-intermediate loop up South Tahoe Mountain and down North Tahoe Mountain trails, with a little fireroad and pavement thrown in to make it a 9.8 mile loop with 1,058 feet of climbing – a nice warm-up ride, perfect for getting acclimated to the mile-high+ elevation.

So rather than reflect on a bunch of lessons-learned from the whole forgotten-axle incident, maybe it’s best to just remember when traveling to stay flexible, improvise when necessary, and try not to stress (too much…) when things go wrong! It doesn’t hurt to have a little good luck thrown in, too: super cool people at the shop (South Shore Bikes, btw), same bike model, size and geometry available to rent, planned delivery from Pivot the next day to the local bike shop for the axle, etc., etc. All-in-all, memories of good rides on the orange Pivot combined with a few good laughs at my stupidity for leaving the axle on the ground more than make up for the hassles and expense of the little boo-boo…

Oh ya, need to figure out a Dopamine Rating for this. Let’s go with a +4 for the nice dinner with Erin, the quick Tahoe Mountain Loop ride, and the fun evening hanging out with the group at our Tahoe condo. But then I guess we should subtract -2 for the lost axle hassle and expense, and the obnoxious Motel 6 guests. So that’s a net rating of +2. Still in positive territory! But I think we can do better over the next few days.

So, keep NeuroAdventuring! Hope to see you on the trails or in the water soon…

View all posts by Bob Averill